An atom is too small and measurement of its mass by an instrument is not a practical solution for day-to-day science. As a result, we need to understand the mass of an atom with respect to a standard. The masses of proton, neutron and electron have been determined experimentally. Through various experiment, the isotope of carbon - C-12 has been found to be the most suitable standard to express the masses of all other elements (including all the isotopes).

Out of this need, the concept of Relative Atomic Mass has been born. It is defined as:

In other words, it is a mass of an atom, relative to the mass of C-12. Since it is a ratio, it is unitless.

For example, let’s consider Magnesium-24. Its RAM will be:

We can clearly see that is is numerically equal to the atomic mass. So, the obvious question is why do we need it at all?

A similar method is followed in case of molecules and the mass of a molecule relative to that of C-12 is called the Relative Molecular Mass (RMM).

Relevance of RAM and RMN in Mass spectrometry

Mass Spectrometry is founded on the principle of separation of the charged particles in vacuum through the force exerted by the magnetic and electric fields. This separation is a result of the mass-to-charge ratio (m/z OR m/e) of individual ionic fragments. Often, the ions produced during mass spectrometry are singly charged (z=1), which effectively shortens the mass-to-charge ratio to the more easily calculated term mass.

The technique of mass spectrometry can distinguish any number of isotopes an element may have. The output is presented in a xy plot where the x-axis represents the mass-to-charge ratio and the y-axis represents the relative abundance. When applied to a sample of a pure element, the mass spectrometry reveals each isotope as a separate peak. This technique can be used not only for identifying the relative abundance of isotopes in a sample of an element, but also to identify the presence and percentage of each element in a compound. Since the relative abundance of isotopes is used in this technique, the y-axis does not have any unit and hence, the highest among the peaks obtained in a mass spectrum is assigned as the “base peak” and taken as 100% (not to be confused with the total abundance of each element). All the other peaks are assigned as a percentage of the base peak.

Identifying the RAM and RMN from mass spectra and its usefulness in structural analysis.

Let’s take an example of the mass spectrum of a sample of Boron. It shows two peaks having relative isotopic masses of 10 and 11 on the C-12 scale. The y-axis is designated as “Relative abundance” where the isotope with mass is assigned as the “base peak” with a relative abundance of 100.

In this case, the relative abundances of the two isotopes are:

The average mass would therefore be, the total mass divided by the total number of atoms.

The other method is to express the y-axis as the “Relative abundance %”. The mass spectrum of Zirconium is shown below.

In this case, the relative abundance % of the 5 isotopes are:

In this case, we would consider the total number of atoms to be 100.

A similar calculation can be done for compounds. Since these comprise of molecules, the term we should find is the Relative Molecular Mass (RMM).

An example of chlorobenzene molecule can help in understanding the utility of mass spectrometry in differentiating the subtleties in the above-mentioned terms and its effectiveness in dealing with isotopes.

This is the mass spectrum of chlorobenzene with the natural abundance of all isotopes. 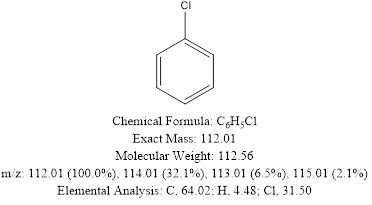 It can be clearly seen that the chlorobenzene with a natural abundance of both isotopes of chlorine has a MW of 112.56 which is also called the RMM.

4. The highest peak is taken as the “base peak” and in the relative abundance method, it is assigned as 100% and all other peaks are assigned as a percentage of that.

5. A mass spectrum can identify the number and percentage of isotopes present in a compound.