The amount of heat evolved or absorbed in a reaction carried out at constant pressure is called enthalpy changes. It is given the symbol ΔH, read as "delta H".

It is important to remember that The term "enthalpy change" only applies to reactions done at constant pressure. The standard enthalpy changes apply when the reaction is run at standard conditions, which are :

Also, the compounds need to be present in their standard state. That is the physical and chemical state that you would expect to find it in under standard conditions.

That means that the standard state for water, for example, is liquid water, - not steam or water vapour or ice.

Oxygen's standard state is the gas, - not liquid oxygen or oxygen atoms.

If we know the standard enthalpies of formation, ΔH, of the reactants and products of a reaction we can calculate the enthalpy change of the reaction using the following shorthand version of Hess's law:

Where Σ ΔH indicate the sum of the change of enthalpies.

Hess's Law is says that if you convert reactants A into products B, the overall enthalpy change will be exactly the same whether you do it in one step or two steps or however many steps.

Scheme 1. Graphic representation of changes of enthalpy in the reactions.

In an exothermic reaction

In an endothermic reaction

Let's have a look now to the following picture: 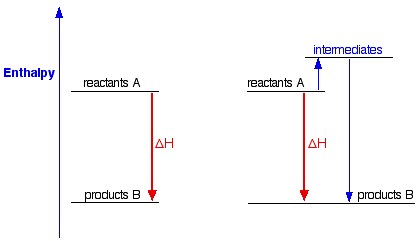 This shows a chemical reaction between the same reagents, producing the same products, but going through two different ways. In one case, there is a direct conversion; in the other, there is a two-step process involving some intermediates.

As you can see, in either case, the overall enthalpy change is the same,  because it is governed by the relative positions of the reactants and products on the enthalpy diagram.

If you go via the intermediates, you do have to put in some extra heat energy to start with, but you get it back again in the second stage of the reaction sequence.

This is true for any reaction.

Let's use an example and explore better this topic:

The "kJ mol-1" (kilojoules per mole) refers to the quantities of all the substances given in the equation. In this case, 98.2 kJ of heat is evolved when 1 moles of hydrogen peroxide liquid reacts to form 1 mole of water liquid and 1 moles of oxygen gas.

Let's use the same reaction in a usual enthalpy problem:

Hydrogen peroxide decomposes according to the following thermochemical reaction:

How do we calculate the change in enthalpy, ΔH, when 1.00 g of hydrogen peroxide decomposes in this reaction?

First of all, we need to know the enthalpy change value, which is given here. If it is not given, there are tables indicating them.

The thermochemical equation tells us that ΔH for the decomposition of 1 mole of H2O2 is -98.2 kJ.

Now, we need to know the number of moles of the relevant compound to calculate the answer. We use the Periodic Table to add up the masses of hydrogen and oxygen atoms in hydrogen peroxide: the molecular mass of H2O2 is 34.0 (2 x 1 for hydrogen + 2 x 16 for oxygen), which means that 1 mol H2O2(l) = 34.0 g H2O2

Using these data we can calculate:

Let's use another example and take in consideration the following reaction:

To solve this type of problem, we can follow a few rules:

-The reaction can be reversed. This will change the sign of ΔH.

-The reaction can be multiplied by a constant.

-The value of ΔH must be multiplied by the same constant. Any combination of the first two rules may be used.

Let's start finding one of the reactants or products where there is only one mole in the reaction. In our case, one CO2 and the first reaction has one CO2 on the product side.

This gives us the CO2 we need on the product side and one of the O2 moles we need on the reactant side. To get two more O2 moles, use the second equation and multiply it by two. Remember to multiply the ΔH by two as well.

Now we have two extra S and one extra C molecule on the reactant side.

The third reaction also has two S and one C on the reactant side. Reverse this reaction to bring the molecules to the product side. Remember to change the sign on ΔHf.

When all three reactions are added, the extra two sulfur and one extra carbon atoms are canceled out, leaving the target reaction. All that remains is adding up the values of ΔH

Therefore, the answer to our initial question, the change in enthalpy for the above reaction is -1075.0 kJ/mol.