What is a compound?

A chemical compound is a substance which is formed from identical molecules made of more than one element which are bonded together. There are four types of chemical compounds: molecules bonded through covalent bonds; ionic compounds; intermetallic compounds, and specific complexes. Compounds are always the result of a chemical reaction and always have a unique chemical composition.

Molecules which are bonded through covalent bonds are considered to be compounds. Covalent bonds form between gas or liquid molecules when they are at room temperature and have a low polarity.  This bonds forms between two non-metal molecules that have similar electronegative values – each molecule ‘shares’ its electrons to form a stable bond. Each atom involved in the covalent bond contributes one atom each to form a shared pair.

Covalent bonding involves interactions of the pi and sigma orbitals, and as such, often lead to the formation of single, double, triple, and quadruple bonds between atoms. Additionally, it is important to know that whenever a covalent bond is formed between two atoms, energy is released – this makes the molecule more stable. Atoms will form as many bonds as they possibly can to become more stable, as long as this action is energetically profitable.

Ionic compounds consist of a metal and a non-metal bonded through an ionic bond. These bonds form between solids at room temperature and have very high polarity. This type of bond is formed through the electrostatic attraction between two ions of opposite charge. As such, is involved the complete transfer of valence electrons. 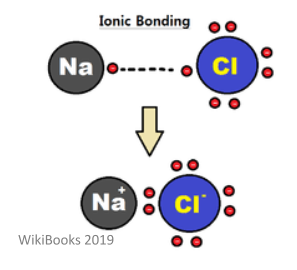 This bond doesn’t have direction, and so the compounds made tend to exist as crystal structures. These structures have both high melting points and high boiling points. The higher the charges are, the stronger the forces and the higher the melting point will be. They also show good electrical conductivity when they have been melted.

Ions will also combine in such a way that means the overall compound will be neutral (i.e. no charge). This means that the charges of each ion must balance each other out.

A complex, sometimes also referred to as a coordination complex, consists of a central metal atom surrounded by other molecules or ions. These molecules are usually bonded to the central metal atom through dative covalent (co-ordinate) bonds – these are bonds where the shared pair of electrons both come from one atom. This central atom is called the coordination centre.

These molecules (or ions) which surround the central metal atom are called ligands. In order to form these dative covalent bonds with the central atom, the ligand must have a lone pair of electrons in the outermost energy level – as such, all ligands are therefore Lewis bases.

The main difference between a compound and a mixture is that mixtures do not have a fixed chemical composition. Additionally, the formation of a mixture requires no chemical reaction. This means that the substances in a mixture are not changed and can be separated from each other without the need for a chemical reaction – this can be done through methods such as filtration or evaporation.

Due to the ratios of elements being variable in a mixture, the properties of mixtures can vary greatly – this depends on the composition. Also, no energy is involved during the creation of a mixture.