The understanding of rates of reaction is a key step towards assessment of the feasibility of a reaction. The branch of chemistry which deals with this understanding is called chemical kinetics. The rate of a chemical reaction is defined in terms of the change in concentration of a designated chemical species which is a part of the given reaction. Of course, like any other rate that depends on time, it signifies the fastness or slowness – in this case, the rate of a reaction.

Where Δ[A] is the change in the molar concentration occurring in the chemical species A over a time period of Δt. If the rate is measured in terms of the reactant, the concentration will be decreasing and Δ[A] will bear a negative sign while it will be positive if the rate is measured for a product. So, we are really concerned about the numerical value of rate and not its sign. During the course of the reaction, the concentrations of both the reactant and the products keep on changing and hence, a better representation is the “instantaneous rate” which is the rate of the reaction at any given point in time. This can be understood from a graph which plots concentration of the species, [A] vs the time, t, resulting in a curve which represents the variance in concentration. The slope of the tangent at any given point on the curve represents the rate at that point. The instantaneous rate thus found is:

The rate is taken as a positive quantity and a more steeper slope in the graph indicates a greater instantaneous rate. One important aspect that needs to be noticed while specifying the rate, is the stoichiometry of the reaction or in other words, the ratio of the chemical species involved in the process. 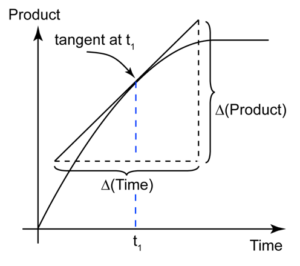 In order to understand the rates of reactions, various theories have been postulated and one important theory is the “Collision Theory”. The basic assumption underlying this theory is that a chemical reaction occurs only when two molecules, each having a certain minimum kinetic energy collide along the line of approach. A reaction profile is good way to approach the collision theory. This graph depicts the change in potential energy of the colliding species, leading to the formation of products. The initial potential energy of the reactant is greater than that of the final products (since the products must be more stable), but the reaction proceeds through an intermediate which has an energy higher than the reactants. This extra energy is known as the activation energy and is reached when the intermediate is formed with minimum distance and maximum distortion among the reacting species. For the reaction to proceed towards the products, this activation energy barrier must be crossed. Rate of the reaction also depends on the collision frequency, i.e. the number of collisions and this is directly proportional to concentration of reactants.

However, only those collisions which occur along the line of approach with the minimum kinetic energy (Activation Energy, Ea) account for the effective collisions and this is represented as:

And the rate of reaction is represented as:

Increasing (or decreasing) the rates of certain reactions are necessary for various purposes. Herein lies the importance of a catalyst. A catalyst is a substance which alters the rate of a chemical reaction without itself being consumed into the final product. The reaction profile gives a clear view  of the working of a catalyst. The action of the catalyst significantly lowers down the activation energy and most often breaks it up into small and separate portions which makes the intermediate more stable and hence increases the reaction rate. 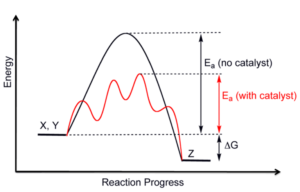