Fig1. Example of a secondary, primary and tertiary bromo-alkanes.

The carbon-halogen bonds are polar, because the electron pair is pulled closer to the halogen atom than the carbon. This is because the halogens are more electronegative than carbon. Iodine is the exception in all this, as it has the same electronegativity of carbon, therefore the bond C-I is not polar.

The electronegativity values are:

From the data above, we can notice that bond strength falls as you go from C-F to C-I, and notice how much stronger the carbon-fluorine bond is than the rest.

The carbon-halogen bond, or the C-X bond, has got to be broken in order for anything to react with the halogenoalkanes. Because that gets easier as we go from fluoride to chloride to bromide to iodide, the compounds get more reactive in that order. Therefore, we can conclude that Iodoalkanes are the most reactive and fluoroalkanes are the least.

Substitution reactions are one of the important set of reactions of halogenoalkanes involves replacing the halogen by something else. These reactions involve either:

-the C-X bond breaking to give positive and negative ions. The  C+ then reacts with something either fully or slightly negatively charged.

- an anion or a cation attracted to the slightly positive or negative carbon atom and pushing off the halogen atom.

Substitution reactions are then divided into three general classes, depending on the type of atom or group that acts as the substituent:

General formula of a substitution reaction is

where Nu stands for nucleophile and X for the halogen

1- nucleophilic substitution: the substituent is electron-rich and provides the electron pair for bonding with the substrate. Examples of nucleophilic reagents are the halogen anions (Cl-, Br-, I-), ammonia (NH3), the OH- , the alkoxy group (RO−), the cyano group and so on.

Nucleophilic substitution proceeds via 2 different mechanisms, depending on whether the haloalkane is primary or tertiary. The mechanism followed by secondary haloalkanes is thought to be a mixture of the other two.

The mechanisms followed by the primary haloalkanes is called SN2 or bimolecular nucleophilic substitution:

As shown in the scheme above, the nucleophile, OH- in our case. attacks the partially positive carbon that is attached to the halogen atom. This goes through a temporary high energy transition state in which the carbon atom is associated with the incoming nucleophile as well as the outgoing halide ion.

On the other hand, the mechanism followed by tertiary haloalkanes is called SN1 and a positive charge is formed, called carbocation:

The tertiary carbonium ion formed by loss of a halide ion from the halogenoalkane is sufficiently stable to exist independently. The tertiary haloalkane is in equilibrium with this carbonium ion. The mechanisms iareformed in the scheme below: 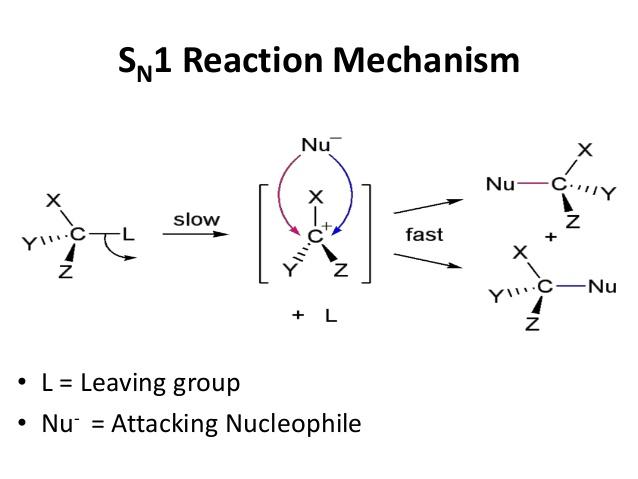 The rate of this type of reaction depends of two factors, the identity of the halogen and the nature of the halogenoalkane. The type of halogen determines the bond strength between the carbon and the halogen Primary halogenoalkanes tend to react via the SN2 mechanism which is slower (as it requires two steps). Consequently the order of reactivity is 3º > 2º > 1º

2- electrophilic substitution: the substituent is deficient in electrons, and the electron pair for bonding with the substrate comes from the substrate itself.  Examples of electrophilic species are the hydrogen halides (HCl, HBr, HI), the nitronium ion (NO2+), and sulfur trioxide (SO3).

3- radical substitution: Involve the reactions of free radicals with suitable substrates. Examples of radical reagents are the halogen radicals and oxygen-containing species derived from peroxy compounds. 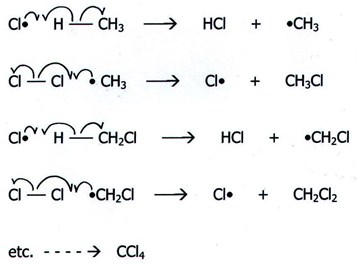