An important class of reactions is defined by oxidation state changes for one or more reactant elements, involving a subset of reactions that facilitate the transfer of electrons between reactant species indirectly via an external circuit rather than directly via intimate contact of redox reactants.

As external circuits are involved, these reactions get characterized by the electric current movement through these, and the study of the chemistry involved in such processes is known as electrochemistry. Over the last two hundred years, this branch of chemistry has developed rapidly, from the study of redox reactions to manufacturing batteries to modern-day electric vehicles.

The oxidation number of an element in a compound is essentially an assessment of how its atoms' electronic environment is different compared to atoms of the pure element. In ionic compounds, the sum of oxidation numbers for all atoms in a molecule is equal to the charge on the molecule. Usually, ionic compounds separate into positive and negative ions as suitable solvents (usually water) and therefore become available for redox reactions and electrochemical application as the solvent serves as the medium for the electric current to flow. Redox reactions in aqueous solutions involve water or its characteristic ions, H+(aq) and OH−(aq), as reactants or products.

Electrochemical cells are commonly known devices that contain all the reactants and products of a redox system but prevent physical contact between the reactants. Therefore, the direct transfer of electrons gets prevented while their transfer takes place indirectly through an external circuit that contacts the separated reactants. These devices are often called voltaic or galvanic cells.

Typically, a galvanic cell consists of a cathode, an anode, a salt bridge for the flow of ions, an external circuit to facilitate the flow of electrons, and two separate containers which respectively house the cathode and anode and two ends of the salt bridge – all of which get dipped in the respective solutions of ionic compounds of the metals which are used to make the cathode and anode. A galvanic cell based on the spontaneous reaction between copper(II) and silver(I) ions is one of the best examples of such a cell. The reactions taking place within this system can be summarized as follows: 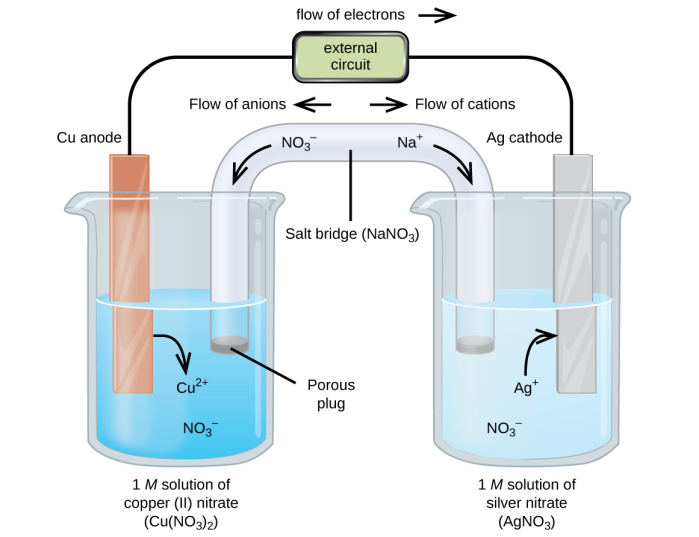 Although chemically, the notation for the reactions is correct, some key components are missing from this expression, without which it is not possible to distinguish if these reactions are taking place inside a battery or in labware. A collection of symbols are usually employed to represent a galvanic cell by providing essential information on its composition and structure to convey the correct meaning. These symbolic representations are called cell notations. The convention for writing these notations is –

This notation clearly points out the concentration of the salts dissolved in water, the solid nature of the electrodes, and the fact that the two portions are connected. Interpretation of these symbols is an essential practice in electrochemical studies involving galvanic cells. It clearly denotes that the spontaneous reaction in this cell yields Cu2+ cations in the anode half-cell and consumes Ag+ ions in the cathode half-cell, causing a compensatory movement of inert ions from the salt bridge that sustains charge balance. Increasing concentrations of Cu2+ in the anode half-cell are balanced by an influx of NO3− from the salt bridge, while a flow of Na+ into the cathode half-cell compensates for the decreasing Ag+ concentration.

The Standard Potential of Galvanic Cells

Every element reacts differently in a redox reaction and this property is a consequence of the stability of their oxidized or reduced states. Therefore, a standard is required to analyse the probability of an element in a particular compound undergoing redox processes. Electrochemical cells allow this relative redox activity to be quantified through an easily measurable property, a potential which is generally called voltage in electrical applications. In electrochemistry, the potential is a measure of the driving force of the transfer of electrons between redox reactants. Since the measurement requires both a donor and a recipient of electrons, therefore it is not possible for a half-cell. However, the difference between the two half-cells is measurable and it is commonly known as cell potential (Ecell).

With a slight modification considering thermodynamics, the standard cell potential (E°cell) is a cell potential measured when both half-cells are under standard-state conditions (1 M concentrations, 1 bar pressures, 298 K):

Making a database for these standard cell potentials would be rather cumbersome if every element’s potential is to be measured against every other element taking into account all the permutations and combinations of their oxidation states. Therefore, scientists have chosen one specific half-cell to work as a universal reference for all types of cell potential measurements. It has been assigned a potential of exactly 0 V and named the standard hydrogen electrode (SHE) based on the half-reaction below:

Typically, an SHE is made of an inert platinum electrode dipped in exactly 1 M aqueous H+ as a stream of H2 gas at 1 bar pressure bubbles through it, at a constant temperature of 298 K.

Such a half-cell is then connected to another half-cell of a chosen element/compound and then the standard electrode potential for that is determined experimentally with reference to the standard hydrogen electrode. A voltmeter in the external circuit allows measurement of the potential difference between the two half-cells.

The standard electrode potential measured in this fashion can then be used as a reference to predict the redox electrochemical spontaneity of two species. A spontaneous process is designated by a positive cell potential while a nonspontaneous process displays a negative cell potential. By convention, these electrode potentials are for reduction processes and therefore represent the increased effectiveness of a species in its action as an oxidizing agent on some other species. The negative value of a standard reduction potential simply means that the species is a lesser oxidant than the H+ ions in water. E°cell is positive when E°cathode > E°anode, and consequently any redox reaction wherein the oxidant is stronger than the reductant, the process is predicted to be spontaneous.

The Spontaneity of Electrochemical Processes in the Light of Free Energy, Potential, and Equilibrium of Reaction under Standard Conditions

Where, F is Faraday's constant, and ΔG° is the standard free energy change of a process.

Also, from thermodynamics, the relationship between the standard free energy change and temperature can be obtained as:

Therefore, redox reactions with positive standard cell potentials will continue towards completion, attaining equilibrium once the majority of reactant converts to the product.

A working shortcut can be developed to interpret the equilibrium in terms of the relationship between the temperature of the reaction, the cell potential, and free energy as:

The Nernst Equation – a recipe for non-standard real-life electrochemistry

While the standard conditions are ideal for establishing the fundamentals of electrochemistry, these are far off from real-life situations wherein a lot of factors contribute. The actual potential of a real cell can be interpreted in terms of an ideal standard potential by employing the Nernst equation as:

A battery is a galvanic cell that is specifically designed and built to be used as a source of electrical power for specific applications. The Daniell cell was one of the earliest successful batteries relying upon the spontaneous oxidation of zinc by copper(II) ions. Over the last century, a lot of technological development has ensured a variety of batteries being developed. The most common batteries are the single-use batteries which use zinc can as both container and anode (“–” terminal) and a graphite rod as the cathode (“+” terminal). These are also called dry cells because they do not contain any liquid electrolyte. Due to the use of carbon (graphite), these are also known as zinc-carbon batteries. Typically, these cells have a potential (voltage) of 1.5V.

Alkaline batteries are the next step of improvement upon the dry cells in terms of energy which is nearly five to six times that of the latter. However, these face issues with potassium hydroxide leakage. Therefore, these need to be taken away from the connected devices when not in use. These may either be rechargeable or not.

Rechargeable batteries are a class of batteries that have found excessive use in modern times. Nickel-Cadmium, Lithium-ion, and Lead-acid batteries are among the most used rechargeable batteries. A nickel-plated cathode, a cadmium-plated anode, and a potassium hydroxide electrode are the components of a Nickel-Cadmium battery wherein a separator prevents the cathode and anode from shorting and the rolled-in design is referred to as a “jelly-roll” which considerably increases the quantity of current the battery can deliver as compared to a similar-sized alkaline battery.

A Lithium-ion battery is lighter and more efficient compared to others and therefore used in all portable devices. The most important aspect is that the voltage output from such a battery is without fluctuations.

The graphite layers act as the negative electrode while lithium oxide acts as the positive electrode. A typical lithium-ion battery can be charged over and over again, the count being in thousands over a few years.

Lead-acid batteries are typically used in automobiles, inverters, and high-electricity demanding situations. These are heavy and contain a caustic liquid electrolyte, H2SO4(aq), and a toxic metal lead, but are regularly the most sought-after because of their high current density.

Fuel cells are galvanic cells that utilize combustive fuels like hydrogen or methane along with an oxidant. Typically, these cells are more than twice as efficient as combustion engines using the same redox reaction and therefore are now being used in extended space missions. Some breakthrough has also been achieved in using these in electric vehicles.

Solution of Common Electrochemical Problems – the case of corrosion

Corrosion is the oxidation and subsequent degradation of metals by a naturally occurring electrochemical process. Rusting of iron, tarnishing of silver, and the blue-green patina that develops on copper are all instances of corrosion. The reason for these processes is the slow reaction of these metal surfaces with the water vapor and oxygen present in the atmosphere. The most common and effective method to prevent corrosion is to paint the surface of a metal. However, corrosion can still occur when a painted surface is exposed to the environment by a scratch through the paint. Other methods include alloying wherein one or more metals/non-metals are mixed in small quantities with the metal, galvanizing, which involves coating the metal surface with a layer of a more readily oxidized metal, typically zinc. Cathodic protection involves the use of a sacrificial anode that itself gets oxidised while the metal of importance is protected. This method is frequently used to protect underground metal containers or metal parts in water heaters.

An external circuit doing work on a redox system by imposing a voltage sufficient to drive an otherwise nonspontaneous reaction is known as electrolysis. Recharging a battery is a typical example of such a process. Other important large-scale uses of electrolysis involve industrial production of metallic sodium and chlorine gas, electrolysis of water to produce hydrogen and oxygen, and the electroplating of precious metals on others.

No wonder electrochemical applications have revolutionized the way modern life is. Some of the key aspects are: