Aromatic compounds are unsaturated hydrocarbon ring structures that exhibit special properties, including unusual stability, due to their aromaticity.

Historically, the first aromatic compound is benzene, and as its first derivatives had pleasant aromas, were called aromatic compounds. Kekulé structure are different ways to represent the chemical benzene, and they were proposed by the scientist Kekulé in 1866, which bravely thought that benzene had a cyclic structure with three alternating C=C double and three  C-C single bonds.

Fig 1. Different way of represent the chemical structure of benzene. This 4 structures are interchangeable

Spectroscopy studies had shown that benzene has a planar ring, with all the carbon-carbon bond distances the same 1.397Å (C-C typically 1.48Å, C=C typically 1.34Å). Since the atoms are the same distance apart, and the only difference is the location of the pi electrons in the two Kekulé structures, they are in fact resonance structures of one another.

This implies that the bond order should be halfway between a single and a double bond, 1.5, and that the  electrons are delocalized around the ring, that means we cannot say exactly where the electrons are localized. Because of the delocalization of the pi electrons, often the double bonds are represented by a circle in the middle of the hexagon

Fig 3. Graphic representation of the delocalization of electrons in benzene.https://chemistry.tutorvista.com/organic-chemistry/nitration-of-benzene.html

In benzene, the bond angles are 120°, each carbon has an unhybridized p orbital, which lies perpendicular to the plane of the ring. These p orbitals each have 1 electron inside and there are therefore 6 electrons in the circle of pi orbitals.

Benzene has 6 planar sp2 carbons, and therefore each carbon has an unhybridized p orbital.

which are perfectly aligned for overlap. As these p orbitals create a continuous ring of orbitals above and below the plane of the carbon atoms, they create a cyclic, so a 3D, system of molecular orbitals.

Based on benzene, aromatic compounds are planar cyclic structures in which each atom of the ring is a participant in a pi bond, resulting in delocalized electron density on both sides of the ring.

A list of the most common aromatic compound can be found here.

Toluene is a classic example of aromatic hydrocarbon: it is a benzene with a methyl group attached to one of the carbons. If the ring contains one or more atoms which differ from carbon, these compounds are called Heterocycles, and the atom is called heteroatom. For example, in figure 4, in the furan, O is the heteroatom of the molecule.

Aromatic compounds are generally apolar, and therefore they are not miscible with water. Some of them are unreactive,  so they are used as solvents for other nonpolar compounds. Benzene, in fact, is a common solvent used in the lab, although chemists always try to use alternative solvent to it, due to its toxicology.

Nomenclature of substitution in the aromatic compound:

Fig 3. From left to right: benzene with 2 Cl in orto, meta and para position.

The double bonds in aromatic compounds are less likely to participate in addition reactions when compared with the double bond in typical alkenes. Cyclic aromatic compounds undergo to a specific kind of reaction, called electrophilic substitution reactions: it is a type of reactions where the ring acts as a nucleophile and it is attacked by a suitable electrophile, and a hydrogen atom in the ring is replaced by an electrophile:

Scheme 1. Generic electrophilic substitution of the benzene. E+ is the electrophile.

If the H is substituted by a Cl atom, the reaction is called Chlorination.

If it is substituted by a Br, we are talking about a bromination reaction.

Another important reaction that is very common in organic chemistry is the Acylation of Friedel – craft, which involves the use of a strong Lewis acid as the catalyst and a mono-acylated compound is formed. Let's remember that a Lewis acid is defined as a chemical that contains an empty orbital able to accept an electron pair. 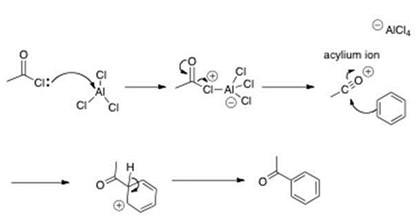 Scheme 4. Friedel craft acylation. In this example, AlCl3 is used as the catalyst and Lewis acid.  http://slideplayer.com/slide/5665045/

Poly-aromatic hydrocarbons are components of atmospheric pollution and are known carcinogens. Continuous exposure of these compounds are associated with increase risk or d diseases correlated with cancer and bone marrow failure. This is why when used in the lab, benzene needs to manipulate exclusively under special system of aspiration, with eliminated the toxic fumes of these compounds.