As with other types of organic compounds, alcohols are named by both formal and common systems. Using the IUPAC system, the name for an alcohol uses the -ol suffix with the name of the parent alkane, together with a number to give the location of the hydroxyl group. The rules are summarized in a three-step procedure:

The first example below has a longest chain of six carbon atoms, so the root name is hexanol. The ―OH group is on the third carbon atom, which is indicated by the name 3-hexanol. There is a methyl group on carbon 3 and a chlorine atom on carbon 2. The complete IUPAC name is 2-chloro-3-methyl-3-hexanol. The prefix cyclo- is used for alcohols with cyclic alkyl groups. The hydroxyl group is assumed to be on carbon 1, and the ring is numbered in the direction to give the lowest possible numbers to the other substituents, as in, for example, 2,2-dimethylcyclopentanol.

Fig1:Example of Nomenclature and classification

The carbon attached to OH is the key to understanding the most common classifications we use for alcohols, that being “primary”, “secondary”, and “tertiary” alcohols.

The key for understanding the physical properties of alcohols is to appreciate just how polarized the hydroxyl group is. Oxygen is “greedier” for electrons than hydrogen, so it be more “electron rich” (more negative) and hydrogen more “electron poor” (more positive) than they would be in a bond where electrons were shared perfectly equally.  We say that electron density in the O-H bond is strongly “polarized” toward oxygen.  Another way of saying the same thing is that the O-H bond has a strong “dipole”.

Since opposite charges attract, these partial charges will line up in solution in a way where the partial negative oxygens on one molecule interact with the partially positive hydrogens on another. These interactions between molecules, which we call, “hydrogen bonds” are about 1/10 as strong as normal bonds, and are much more transient, lasting only a fraction of a second on average. Still, the effect of hydrogen bonding is to lead molecules to “stick” to one another.

Hydroxyl groups greatly increase boiling points. Look what happens to the boiling point of propane (an alkane)  when a CH3 group is replaced with an OH group – the molecular weights are the same, but there’s over a 100° C difference in boiling point.

Replacing a CH3 on propanol with an OH group gives us “ethylene glycol”, a “di-ol” (actually called a “vicinal diol” since the alcohols are on adjacent carbons). Having twice as many hydroxyl groups, we would expect it to be even more polar than propanol, and thus have a higher boiling point. This is true – the boiling point of ethylene glycol is 197°C.

Read more about Reactions of Alcohols

An acid is a molecule or ion capable of donating a proton or hydrogen ion H+, or, alternatively, capable of forming a covalent bond with an electron pair (a Lewis acid). The first category of acids is the proton donors or Brønsted acids. Reactions of acids are often generalized in the form HA ⇌ H+ + A−, where HA represents the acid and A− is the conjugate base. The numerical value of Ka is

The stronger of two acids will have a higher Ka than the weaker acid. Because the range of possible values for Ka spans many orders of magnitude, a more manageable constant, pKa is more frequently used, where pKa = −log10 Ka. Stronger acids have a smaller pKa than weaker acids.

In general, alcohols in aqueous solution are slightly less acidic than water. However, the differences among the pKas of the alcohols are not large. The differences in acidities are due to the effect of substituents in the 1-position removed from the acidic site. Moreover, the more highly substituted alcohols vary only in the structure two positions removed from the acidic site. 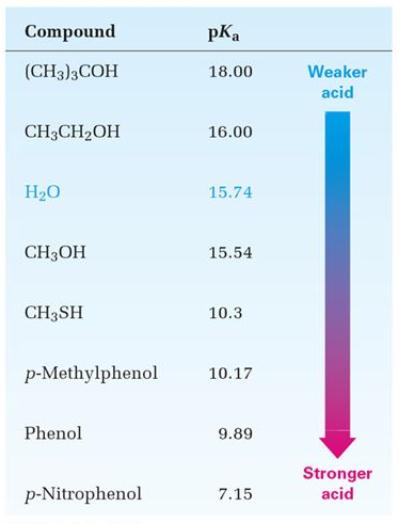