Acids taste sour, are corrosive to metals, change litmus (a dye extracted from lichens) red, and become less acidic when mixed with bases.

Acids and bases affect daily life because they play a role in many reactions, from digesting food to cleaning soap scum off a shower wall.

The amount of acidity or alkalinity that is in a solution is measured by the term pH.

pH  measures of the amount of protons or hydrogen ions that are present in an aqueous solution. Acids are primary contributors to the measure of pH in a solution, and the presence of acids is a key characteristic of almost all solutions, from blood in the body to foods and drinks we consume.

In 1909, the Danish biochemist Sören Sörensen invented the pH scale for measuring acidity. The pH scale is described by the formula:

The pH scale is a scale that is used to represent the level of acidity in a solution. 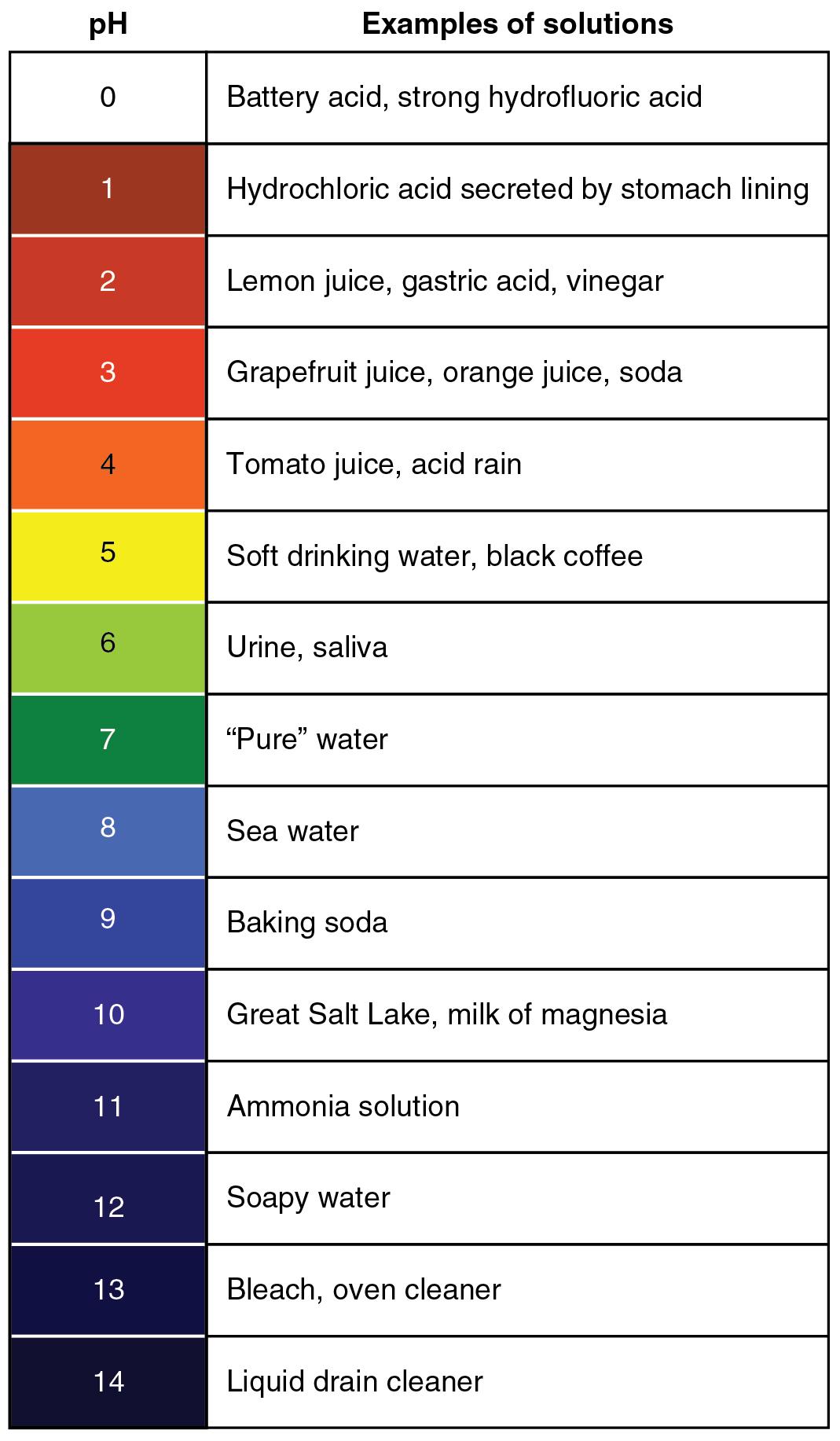 An acid dissociates, or breaks apart, and donates protons, or hydrogen ions, in an aqueous solution, while a base donates hydroxide ions in a solution.

When acids are added, they release more hydrogen ions into the solution, and this causes the pH of the solution to drop.

In the late 1800s, the Swedish scientist Svante Arrhenius proposed that water can dissolve many compounds by separating them into their individual ions. Arrhenius suggested that acids are compounds that contain hydrogen and can dissolve in water to release hydrogen ions into solution. For example, hydrochloric acid (HCl) dissolves in water as follows:

Arrhenius defined bases as substances that dissolve in water to release hydroxide ions into solution. For example, a typical base according to the Arrhenius definition is sodium hydroxide (NaOH):

Arrhenius's theory also explains why all acids have similar properties to each other (and, on the other hand, why all bases are similar): because all acids release H+ into solution (and all bases release OH-). The Arrhenius definition also explains the process of neutralization: acids and bases counteract each other and a base can make an acid weaker, and vice versa.

Weak acids are acids that partially release the hydrogen atoms. These acids may lower pH by dissociation of hydrogen ions, but not completely (not to pH=1, for example). Weak acids include acetic acid, which is vinegar, and citric acid found in oranges and lemons.

Strong acids, on the other hand, completely dissociate and release every hydrogen atoms present in their molecules. This means that strong acids are more potent in lowering the pH of a solution when compared with weak acids. There are only 7 strong acids, including hydrochloric acid, which can be found in the stomach, and sulfuric acid, a corrosive acid found in things such as car batteries and fertilizers.

The opposite reaction can also occur: H+ ions can combine with OH- ions to form neutral water molecules.

The fact that water molecules dissociate to form H+ and OH- ions, which can then recombine to form water molecules, is indicated by the following equation, which is in equilibrium:

The fact that water dissociates to form H+ and OH- ions in a reversible reaction (indicated by the double arrow) is the basis for an operational definition of acids and bases that is more powerful than the definitions proposed by Arrhenius.

Laboratory test for acids and bases follow the above definition, and can tell you if a substance is a base or an acid:

To decide whether a compound is an acid or a base, we dissolve it in water and test the solution to see whether the H+ or OH- ion concentration has increased.

Some typical Acids and Bases

Some example of acids we use in everyday life:

-Acetic acid is the main component of vinegar.

-Dilute Sulfuric acid is the electrolyte used in the lead-acid batteries in your car.

-Citric acid is found in citrus fruits (like lemons, limes, and oranges)

-Lactic acid is produced as milk or dairy products go bad - this is what makes them sour.