Crystals are solids in which all of the atoms are arranged in a repeating pattern. These highly-ordered atoms form a structure known as a crystal lattice which extends in all 3D directions. There are four types of crystal structures:

Crystals are formed through a process called crystallisation.

Metallic crystals are structures made entirely of metal elements. The atoms in these structures are bonded through metallic bonding – this is a type of bonding in which an electrostatic force between a cloud of delocalised electrons is attracted to the positively-charged metal atoms. This structure gives metallic crystals a number of properties:

Metallic crystals are usually found in one of the following three arrangements:

The atoms in these structures are packed very closely together, as this is the most efficient arrangement and helps to make the gaps between each atom as small as possible.

These crystals are easily identified through their shiny surfaces. This is because the delocalised electrons are not tied to any one specific bond, and so can move freely throughout the crystal lattice, absorbing and emitting light of any wavelength.

Ionic crystals are crystal structures in which the atoms are held together through ionic bonds. There are no free electrons in this structure, and rather the atoms are bound through electrostatic force arising from a difference in charge.

The image below shows a good example of an ionic crystal: common table salt (also known as NaCl). Here you can easily see the ions with opposite charges in the lattice structure. 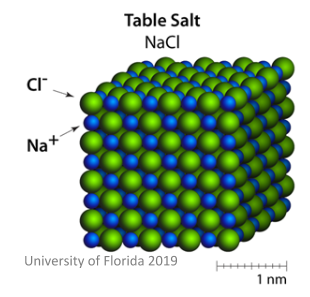 There are a number of properties which arise from this structural arrangement:

Covalent crystals are structures in which the atoms are bonded through covalent bonds – this is the type on bond where the atoms share their outer electrons. You need to know that these covalent bonds are directional, which essentially forms one huge interlocking crystal structure.

This bonding gives covalent crystals a number of properties:

The image below shows the structure of diamond, a covalent crystal. The red lines in the image represent these very strong covalent bonds. The blue atoms are representative of carbon atoms which sit on ‘lattice points’, and the green atoms show atoms which are not lattice points. 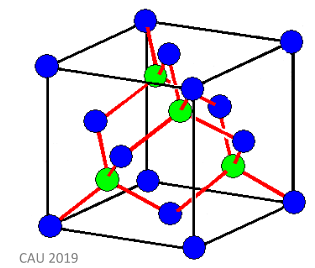 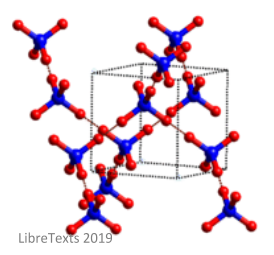 These bonds give molecular crystals a number of properties:

The intermolecular forces holding these molecular crystals together are a lot weaker than covalent bonds or ionic bonds.