Conduction is defined as the transfer of energy from one atom to another through direct contact – this can either be through ionic conduction, electric conduction, or heat conduction. Conduction can occur in solids, liquids, and gases – solids conduct most efficiently because the molecules are much closer together than in other states, as shown in the image below.

Particles in a solid are in a relatively fixed position and the bonds between them are very strong. This means that the conduction of energy from one particle to another is most efficient in this form.

The particles in a liquid don’t have a fixed position and so the bonds between them are not as strong. This makes liquids poor conductors.

The particles in a gas are much further apart which means the transfer of energy is very inefficient. They are therefore very poor conductors.

Ionic conduction is defined as the movement of an ion from one ‘site’ to another. This is possible through ‘defects’ in the lattice structure of a solid or an aqueous solution – these defects allow the ions to move in an electric field. As you can see in the image below, there is a ‘vacancy’ which allows the ions to move.

Certain solids possess very high ionic conductivity, which is useful in solid-state electronics such as computers and mobile phones. It is also a useful process in both normal and rechargeable batteries and fuel cells. 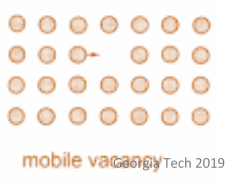 Ionic salts can also be dissolved in solution, which then allows an electric current to flow. In this case, the ions are both electrically charged and mobile, making them good charge carriers. Solid salts don’t conduct electricity because they simply don’t have any charge carriers that are mobile.

In metals, electrical conductivity can happen as a result of the movement of electrically charged particles. The atoms of metal all have valence electrons – these are electrons that are found in the outer shell of each atom, but they are ‘free’ to move throughout the structure. The movement of these free electrons is what enables to metal to conduct an electrical current. When they are free to move around, they are referred to as being delocalized. Without external influence, they move randomly throughout the structure.

A 12-coordinated metal is one in which the atoms are so closely packed that there are as many atoms as possible filling the available space. This configuration means that each atom in the structure will be touching 12 other atoms in 3D space. The images below show how a particular atom will have 6 others touching it in the same layer, 3 in the layer above, and 3 in the layer below – this gives a total of 12, hence the name.

Another configuration is the 8-coordinated metal, which is most often found in Group 1 of the Periodic Table. These are packed less tightly together and, as such, each atom only touches 8 others in 3D space.

Thermal conduction (sometimes also called heat conduction) occurs when rapidly moving particles interact with their neighbouring particles, thus transferring a portion of their kinetic energy. This process happens from regions with a higher temperature to regions of a lower temperature. There are 4 main things which affect the rate at which heat is conducted:

Metallic solids conduct heat the best, whilst gases conduct heat the worst. This is due to the particles in a solid being in such close proximity that a collision, and thus transfer of thermal energy, is incredibly likely. They are good thermal conductors for exactly the same reasons they are good electrical conductors. It is for this reason that the higher the density of the solid, the better it will conduct thermal energy.

It is important to remember that energy is transferred from one particle to another, and there is no overall movement of particles in the process.