What is light absorption?

Light absorption is the process in which light is absorbed by matter and converted into energy. In an atom, electrons vibrate at a specific frequency – this is called the natural frequency. If a wave of light hits a material in which the electrons are vibrating at the same frequency as the wave of light, the electrons will absorb the energy and convert it into vibrational motion. This is why objects have different colours – different materials’ electrons will vibrate at different rates, and therefore absorb different frequencies of light. 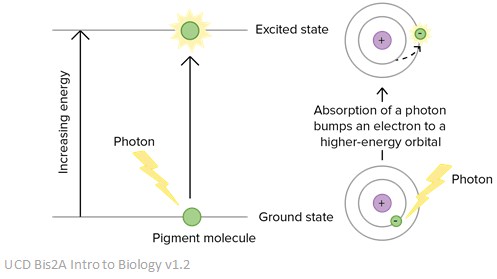 When an electron absorbs energy, is it promoted to a higher energy level further away from the nucleus of the atom and is described as being ‘excited’.

What happens after an electron becomes excited?

Electrons don’t like being in an excited state. This means that after becoming excited and moving to a higher energy level, they soon fall back to their original energy level. However, to do this, they have to release a packet of energy – this is called a photon. The size of the photon released is exactly equal to the size of the jump the electron had to make in the first place.

Absorption spectroscopy is a technique used to measure the absorption of energy. The absorption spectrum of a certain material is shown by a continuous band of colour with black lines between them. The coloured parts represent the total light that is focused on the material. The black lines show an absence of this light – these are the parts of the spectrum where the electrons have absorbed the light photons.

Emission spectroscopy is used to measure the photons released when an electron falls to a lower energy level after becoming excited. The emission spectrum of a certain material is shown by a black band with separated coloured lines. These colours lines are the parts of the spectrum where photons have been released from the electrons when they fall to a lower energy level.